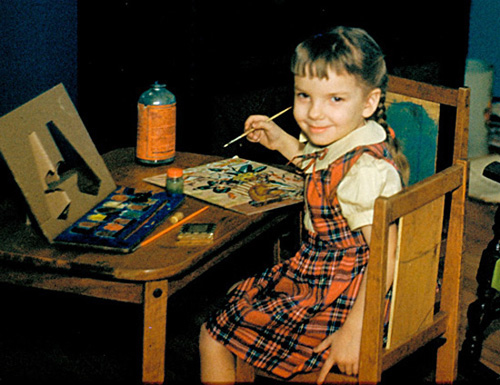 In her own words, legendary illustrator Nancy Stahl “has been at this illustration thing a very long time.” To delight in the beauty of it all, breeze on over to www.nancystahl.com.

Well, of course there are the blade mishaps, like the one in my freshman year at college, first assignment. Having been raised in a family whose motto was Frugality Uber Alles, I decided there was no need to buy any fancy art supplies, a double-edged razor blade that I already owned would work as well as a single one. Or the time I was cutting mats with a friend and he ran out of the room interrupting a highly amusing story from me. When I sauntered into the kitchen, he calmly asked if I would look on the living room floor for his thumb. It was a good-sized chunk that they reattached.

Then there were the chemical risks that we took. My dinner plates were used as palettes when I was so busy that I ran out of the real thing. The warning label on Bestine was thought of in the same good-natured benign way as the text on a Dr. Bronner's Soap bottle. So, we had fun creating "goobers" by applying rubber cement to the palms of both hands and rubbing them together until our very own rubber cement pickup was created.

But for me, the frustration of material supplies not performing the way they were meant to under deadline was the most exasperating. In the case of gouache, the migratory color that would keep surfacing when a lighter color was put over a dark one to the point of becoming a horror movie classic is a fond memory that was finally put to rest with the use of the computer. And once drum scanning became the norm, my poor gouache paintings could not stand up to such ill treatment. Thickly applied gouache is such a delicate little scab of a thing. I did a cover for a major magazine and waited three long months to see it in print, only to discover that the faces of all my little Titanic survivors had fallen off somewhere mid-Atlantic or mid-scan. Now that's sad.

I'd say the Rapidograph. If I had been better at cleaning the darn things, maybe I wouldn't have thrown so many at my wall like they were darts.

Gouache is still available, so it doesn't really qualify, but I did love the smell of the stuff when it was wet and that first dip of a loaded brush into a clean fishbowl of water, the way it would twist and swirl like beautiful upside-down colored smoke.

The only thing I threw away when I converted to digital was my Lucy. And I don't regret that one bit. Crank, crank, crank...

Not so much with art supplies as with software. I came across the box for Expressions last week. Eight floppies that were a flop.