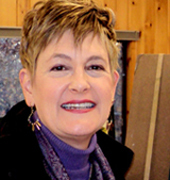 Graphic artist and illustrator Linda McCulloch felt that Florida’s Ringling School of Art had well-prepared her for the freelance life. But not long after her career began, she found herself as intimidated as the rest of us by the need to cross over into the new computer age. “The way the computer affected me the most was to make me aware that I might forget how to draw -- something I love to do,” says Linda. She and her husband counterbalanced their new digital life by taking figure drawing at various art retreats, something she found to be a lifesaver. Today, they both run a biweekly figure drawing atelier in Atlanta. “It’s amazing how important it is to me to still be able to turn out a decent drawing of a human figure. It’s the basis for so much of the concept work I do for clients where I often have to create stuff from scratch.”

She operates her company, Design That Works out of Tucker, GA, and her clients have included, among others, Nissan, Chevrolet, Coca-Cola, and IBM. She’s currently developing a line of art “about cats and the things they would say if they wanted to speak English.” To see Linda’s art and read more about her, go to www.designthatworks.com.

My second job out of art school consisted of pasting up hideous cluttered newspaper ads and inserts for a very well known DIY big-box store. It required cutting out lots of stats, and spray-mounting them to illustration board. There were only three of us, and my boss was very frugal… no, wait, make that DIRT-CHEAP! Part of my job involved cutting stat paper with straight razor blades into tiny strips in the stat camera dark room. No paper cutter. No X-acto knife. Plain old razor blades.

One day we had a rush on, and our salesman was outside the stat room yelling at me to hurry up. I was already hurrying, but he kept yelling that he was going to be late for his meeting. So, I tried to hurry more.

Interesting thing about working in a darkroom: the light is red, so you can’t actually see your blood. And, yep, here it comes, folks… a razor blade diagonally right through my nail and the end of my left index finger. Even with the red light, I knew it was pretty bad, so I opened the door and the blood was actually spurting out of my finger. I felt faint and swooned: “I think I need to go to the hospital.” The salesman looked at my finger and my dead-white face, then said in an outraged tone: “But who’s going to finish my stats???!!!”

My boss drove me to the hospital ER, where I was lucky to get a good surgeon. Six stitches later (including the ones in my nail), I found myself on the bus home with my finger all bandaged up and elevated. If you look closely, you can still see the scar on my finger to this day. I worked at the place for almost a year more, and never got one word of caring sympathy from that salesman.

Wax and waxers. I don’t care what kind. I live in Atlanta, which gets extremely warm in the summer. Wax just doesn’t work down here, but some of the agencies used it -- less carcinogenic and less messy than Spray Mount, I guess. But once I had to leave some mechanicals in my hideous used 1970 Ford Torino with no power steering, no power brakes, and no air conditioning. It was just for a little while, but when I came back, everything had completely melted off of the mechanical board. Everything. I hated that car, and it finally died from lack of a badly needed ring job, covered in kudzu in my apartment parking lot. Which is why I had to take the bus from the ER in answer #1.

I loved gradient Pantone papers. I just thought they looked so smooth and perfect. I guess someone had actually sprayed the paper somehow or it was done mechanically, but back then, the only way you could get a gradient to print in a spot color was by gluing it right on the board. For years, I kept a flat file full of medium gray to black, and light gray to dark gray.

Like many of the folks who’ve already shared their stories, I keep tons of the old stuff! I still have all my old Rapidographs. Needless to say, they don’t work any more and never will. I could probably gain a lot of useful space in my old taboret if I just cleaned it out. I rarely throw stuff out, but see my answer to number 5, below…

Yes! I bought this weird contraption that was “like” an airbrush but without the expense of an actual airbrush. You attached design markers to the nozzle which was hooked up to a can of compressed air. You could really kind of airbrush stuff. I had seen this in a design studio where I was freelancing, and they let me use it. I just thought it was the coolest thing ever. When I finally threw it out for some inexplicable forgotten reason, it was still in the box. Now I wish I had kept it, just so I could send you a photo of it.

(Curator’s note: Mourn for your contraption no more, Linda! The Design Marker Airbrush can be seen in the Color Tools section of the Museum, albeit without the box)