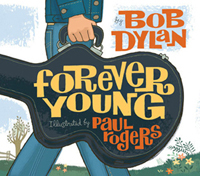 Illustrator Paul Rogers has long been celebrated for his poster art for events such as the NFL Super Bowl, the Playboy Jazz Festival, the New Orleans Jazz and Heritage Festival, and the Seattle International Film Festival. He is most recently known for his collaborations with Bob Dylan on Dylan's children's book Forever Young

, as well as with Wynton Marsalis on the book Jazz ABZ

. His award-winning art has been commissioned by Pixar Animation Studios, Warner Bros., NIKE, The New York Times and The New Yorker, to name a few. A native Californian, he resides in Pasadena with his wife, book designer Jill von Hartmann, and is a faculty member at Art Center College of Design. More about Paul and his work at www.paulrogersstudio.com

Not exactly an art supply experience, but one story stands out from the days before it was possible to e-mail digital files to clients. There was always that last-minute rush to wrap up a painting and get it to Fed-Ex before 5:45 on the West Coast for overnight delivery.

My studio was in the same building as my good friend Kenton Nelson. About 5:30, he came down the hall with a look of dread on his face and a finished airbrushed painting in his hands. He had dropped a cassette tape on it, and the corner of the plastic case had gouged a dent in the painting that was going to be impossible to touch up.

So here's what we did: We used a screwdriver to gouge a hole in the FedEx box about where it would line up with the painting, wrapped it up, and sent it off. The next day, Kenton called the art director to see how he liked the illustration, and he said, "I love it, but the goddamned FedEx guy must have gouged the package with a screwdriver and it went through to your painting. Don't worry about it though, we'll retouch it on the separations."

When I started as an illustrator in 1980, everyone was using an airbrush. Learning how to use that thing took a lot of patience, and although I liked the way the finished pieces looked, it was a crazy way to work. You had to plan everything out from the start and cut all those friskets. Then the airbrush would clog at the worst times. Making changes was a nightmare. I don't miss that.

I still use a ruling pen occasionally for some hand-done images that require a clean opaque line. That was one tool that was a really hard to master, and I'm sure that no art student today has ever tried to use one.

I remember ordering this chemical from a company in Santa Barbara that you could put on illustration board. When you put a film negative over it and exposed it to the sun, a non-photo blue image would appear on the board. Then you could paint the colors that you wanted, and everything would be perfectly registered to the film-pos that went on top. That was back in the days when we all were trying to get a really clean black line on our color work.