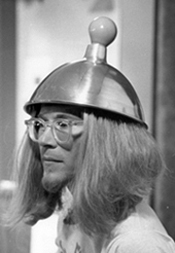 David Burd insists he had a "mercifully (appropriately?) brief career in the graphic arts, beginning in the ink-and-paint department of an animation sweatshop in New York City." From there, he experienced an even briefer career in comic books (one issue of Tweety & Sylvester for Gold Key), and then more animation work and graphic arts assignments.

The lure of show business took him "from the anonymity of the art studio to the fame (not fortune) of the small screen." There, he admits to using his modest talents to draw (intentionally) funny pictures, and to create both props and costumes. Many times since then, David claims to have looked back upon these years and asked wistfully: "I did what?"

Most of my bad experiences involve Rapidograph pens - specifically, trying to clean them. My boss at the animation studio used to soak his clogged pens point-down in a jar of water, like he was trying to root a plant cutting. They'd soak there for days, maybe weeks. Then he'd try to use them, realize they were hopelessly caked with dried ink, and throw them out. It was a long process.

Being the clever person that I am, I would boldly take my pen points apart to clean them, fearlessly withdrawing that thin piece of wire -- as fine as a human hair in the case of a 000 pen -- and then try to jam it back in place. It crumpled up into a useless zigzag that could never be properly straightened out. This painful, costly mistake happened several times.

I have a love/hate relationship with the X-acto #11 blade. On the one hand, I love it because nothing can take its place when you need to make a precise cut. On the other hand, I hate it because one of those precise cuts would invariably be in my finger. It's practically guaranteed that if I pick up an X-acto knife I will cut myself within X-actly five minutes.

I had a job once cutting thousands of Rubylith mattes for a motion-graphics animation job. We went through so many X-acto blades that we used to sharpen the dull ones by hand to save money. Using a whetstone, much like the early cavemen did, I'd slide the blade back and forth endlessly until it was razor sharp. Then I'd proceed to give myself a fresh cut. Ah, those were the days.

I still mourn the passing of Bestine. Long after I stopped using it to thin Best-Test One-Coat cement, I found it indispensible for removing price stickers. Nothing else worked so well (or caused so much cancer!). I bought some of the new non-carcinogenic stuff, but it's not the same. There's nothing like the smell of highly volatile petrochemicals seeping into your lungs. Kids today don't know what they're missing.

No! I never throw anything away. That's my problem. I've still got all of my old art supplies in case I get an assignment. Rummaging in my drawers (of my desk) I found my original kneaded eraser that came with my Jon Gnagy Learn-To-Draw-Kit, circa 1962. The charcoal and paper stomp are long gone, but the kneaded eraser still remains. I guess I really "kneaded" it, huh?

For me it was probably the Ames Lettering Guide. Not the most expensive product I bought (about a buck seventy-five if I recall) but one of the most disappointing. I bought it with the best intentions of becoming a Famous Professional Letterer. But I didn't realize it took hard work and talent - two things that were in short supply. I may have used it once, or not at all. Of course, I still have it, just in case I suddenly become talented or find the patience to practice.

Unforgettable Art Supply Moments
post a comment
comment by RobbM
July 1st 2018
I disassembled my pens for cleaning. The trick to getting the wire back in place was filling the tip with water and letting the needle gently drift in. I'd clean my .18 that way.
comment by 3243
February 12th 2012
You think Rapidograph pens were hard to clean? I once bought a set of Staedtler-Mars technical pens which I soon discovered clogged up even more rapidly than Rapidographs, and those thin wires inside the pen point would also mush up with little or no efort at all.
comment by Judy K
January 17th 2012
I used to clean my rapidograph pens - but I used an ultrasonic cleaner. I enjoyed watching the pen parts wiggle around in the water, and gobs of ink appear and dissipate. (I was easily amused in my 20's. Oh wait. I'm in my 50's and _still_ easily amused...